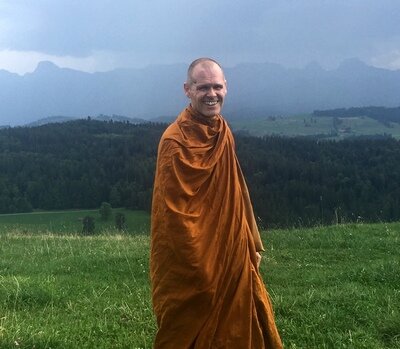 In January this year, Ajahn Abhinando visited Thailand to participate in the annual Ajahn Chah Memorial Gathering at Wat Pah Pong. His visit there also provided an opportunity for him to be introduced to the sangha elders in this community as the newly appointed abbot of the branch monastery of Wat Pah Pong in Switzerland, Dhammapala.

Ajahn Abhinando was first accepted into the Bhikkhu Sangha at Cittaviveka Monastery with Ajahn Sumedho as his preceptor in 1994. Initially he stayed for five years at Chithurst, with Ajahn Sucitto as his abbot. After that he spent varying amounts of time residing at Santacittarama Monastery in Italy and at Bodhinyanarama Monastery in New Zealand. Eventually in 2002 he was drawn to Aruna Ratanagiri Monastery in the North of England. There he served the community as the second monk for fifteen years. In the summer of 2017 he was invited to become a member of the monastic community at Dhammapala. The previous abbot, Ajahn Khemasiri, relinquished his role there in October 2018, and Ajahn Abhinando is now serving in his place.

Back to all news