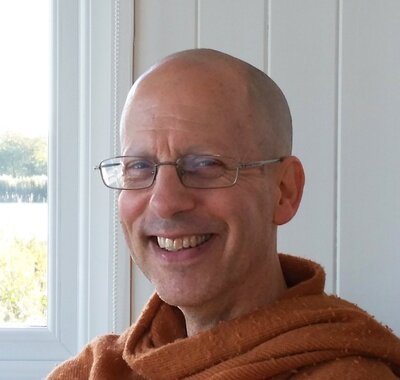 UK_Cittaviveka: A New Abbot To Be Appointed

At the April Elders Council Meeting it was formally agreed that after this year's Rains Retreat (vassa) when Ajahn Karuniko steps down from being abbot at Cittaviveka Monastery, Ajahn Ahimsako will take up the role.

Ajahn Ahimsako was born near San Francisco, California in 1959, and spent nearly thirty years living in various countries pursuing a career in classical ballet as a dancer, teacher, and educator. While living in England he traveled to Sri Lanka, where his interest in Buddhism prompted him to begin visiting Amaravati Buddhist Monastery and the London Buddhist Vihara. He began his monastic life in 2002 at Abhayagiri Buddhist Monastery in California, and was accepted into the Bhikkhu Sangha there in 2004 with Luang Por Pasanno as preceptor. Since 2009 Ajahn Ahimsako has spent eight years living at Amaravati Buddhist Monastery under the guidance of both Luang Por Sumedho and Ajahn Amaro. More recently Ajahn Ahimsako spent one year living at Wat Ratanawan in Thailand. He joined the Chithurst community (Cittaviveka) in the autumn of 2018.

Back to all news