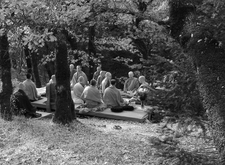 Ajahn Chah’s style of teaching and personality had a unique ability to reach people of other nationalities. Many foreigners came to learn from, and train under with Ajahn Chah. The first of these was the American-born monk, Ajahn Sumedho. In 1975, a group of Ajahn Chah’s foreign disciples were asked by villagers not far from Ajahn Chah’s monastery to start a new branch monastery. Ajahn Chah agreed, and established Wat Pah Nanachat (International Forest Monastery) near the village of Bung Wai as a monastic training centre for internationals. Since that time, Wat Pah Nanachat has become a respected Forest monastery and has opened up additional monastic retreat centres, including some in remote forest and mountain locations. Throughout the main monastery and these additional centres, Wat Pah Nanachat currently includes under its umbrella over fifty monks representing twenty-three nationalities.

In 1976 the English Sangha Trust invited Ajahn Sumedho to establish a Theravada monastery in London. Along with a small group of monks, Ajahn Sumedho heeded the request and established the first branch monastery in Ajahn Chah’s lineage outside of Thailand. Since that time, a number of Ajahn Chah branch monasteries have been created throughout England, France, Australia, New Zealand, Switzerland, Italy, Canada and the United States.

This development has included the establishment of a community of nuns, (siladhara). The first residence specifically for nuns was set up in 1980 as part of Chithurst Monastery and the second was in 1984 as part of the Amaravati community.

These monasteries, under the guidance of many of Ajahn Chah’s senior Western disciples, are allowing the example of Forest monasticism to spread westward. They are supporting the direct and simple practice of the Buddha’s original teachings, as it has been preserved in the Forest tradition for 2,500 years, to accompany Buddhism as it more generally transfuses throughout and adapts to the Western world.

These monasteries are initiated only at the request of the lay community and are supported entirely by the lay community’s generosity. They are making available the direct and simple practice of the Buddha's original teachings to a broader spectrum of humanity.

For current and future developments please see the monasteries and current news pages.
(Adapted from abhayagiri.org)