Home / About / History / Significance of the Forest Tradition

Significance of the Forest Tradition 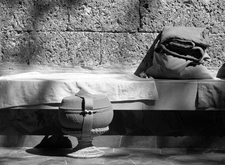 The Forest tradition began in the time of the Buddha and has waxed and waned throughout Buddhist history. Actually, the Forest tradition in one sense even predates the Buddha, as it was a common practice of spiritual seekers in ancient India to leave the life of town and village and wander in the wilderness and mountains. The Buddha himself joined this tradition at age twenty-nine, giving up his life as a prince in order to seek the way beyond birth, aging, sickness, and death.

The Buddha was born in the forest, enlightened in the forest, taught in the forest, and passed away in the forest. Many of his greatest disciples, such as Venerable Añña Kondañña and Venerable Maha Kassapa, were strict forest dwellers who maintained an austere renunciant lifestyle. The Buddha allowed determined forest-dwelling monks, such as these two, to cultivate thirteen special practices, called dhutanga practices, which limited their robes, food, and dwelling places. These special renunciation practices, along with the practice of dwelling in nature provided the fundamental backdrop for Forest monasticism throughout Theravada Buddhist history.

Many of the Buddha's disciples chose to live in forest wilderness areas because their ruggedness and danger provided excellent arenas for spiritual training. In addition to the tigers, snakes and other challenges of wilderness dwelling, there was also the simplicity and natural beauty which afforded a suitable setting for pleasant abiding and joyful meditative concentration. Furthermore, by living in the forest, the monks were able to set a positive example for future generations.

The practices of these early forest dwellers exemplified the path to liberation. Since the time of the Buddha and his early disciples, the discipline of the monastic order and the integrity of the Buddha’s teachings have experienced numerous cycles of growth and decline. Throughout these cycles, the original ethos of the Buddha’s teachings has been preserved both through the example of these early forest-dwelling disciples and also through the efforts of later monastics who also focused on meditation practice, simplicity, and renunciation.

The way of practice, the teachings, and the codes of monastic conduct which the Buddha expounded 2,500 years ago, run deeply against the grain of worldly concerns such as material success, wealth, power, fame, pleasure, and status. The presence of a monastic order can be a great boon to a society by providing a source of wisdom, peace, and clarity that transcends these worldly concerns. Alternatively, however, worldly concerns can enter into and distort monastic life. Historically, one way this has happened is when monks and nuns focused on meditation become accomplished in their practice, and then become well-known teachers, drawing to their monasteries many visitors bearing gifts and offerings. The very success and reputation of these teachers draws wealth, power, and fame into the monastery. Without constant heedfulness, the ways of the world might then enter into the monastic order, generating corrupt and obese monastic institutions. In such times, the practice of Forest monasticism by wise teachers concerned with spiritual living, discipline, and meditation, rather than institutional rank and official responsibility, plays a crucial role in revitalizing the original ethos of the Buddha’s teachings.