Home / About / History / This Community 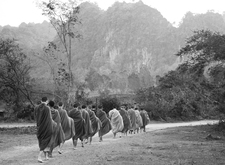 The Thai Forest tradition is one branch of the Theravada Buddhist tradition. Theravada Buddhism, also known as the Southern School of Buddhism, is present throughout Thailand, Burma, and Sri Lanka. The Theravada tradition is grounded in the discourses recorded in the Pali Canon, the oldest Buddhist scriptures. Theravada literally means the Way of the Elders, and is named so because of its strict adherence to the original teachings and rules of monastic discipline expounded by the Buddha.

The Theravada Buddhist tradition within Thailand is composed of many different strands and types of monasteries. Most villages and towns in Thailand have at least one monastery, which might serve as a place for ceremony, prayer, cultural activity, education and medicine. Thai monasteries differ widely and express a range of functions and approaches to monastic life. Some monasteries focus on chanting and ceremonies; some on study and intellectual pursuits; some on healing and blessings; some on practice and meditation and some cater to local superstition and magic. In addition to varying in their approach to monastic life, different monasteries also vary widely in terms of how strictly they uphold the Buddhist code of monastic discipline, called the Vinaya.

The Thai Forest tradition is the branch of Theravada Buddhism in Thailand that most strictly holds the original monastic rules of discipline laid down by the Buddha. The Forest tradition also most strongly emphasizes meditative practice and the realization of enlightenment as the focus of monastic life. Forest monasteries are primarily oriented around practising the Buddha’s path of contemplative insight, including living a life of discipline, renunciation, and meditation in order to fully realize the inner truth and peace taught by the Buddha. Living a life of austerity allows forest monastics to simplify and refine the mind. This refinement allows them to clearly and directly explore the fundamental causes of suffering within their heart and to inwardly cultivate the path leading toward freedom from suffering and supreme happiness. Living frugally, with few possessions fosters for forest monastics the joy of an unburdened life and assists them in subduing greed, pride, and other taints in their minds.

Forest monastics live in daily interaction with and dependence upon the extended community. While the laity provide the material supports for their renunciant life, such as almsfood and cloth for robes, the monastic Sangha serves as a resource for spiritual inspiration and guidance. The conduct of Forest monks is governed by 227 protocols which include total celibacy, eating only between dawn and noon and abstaining from handling money.  They also commonly engage in a practice known as 'tudong' in which they wander on foot through the countryside either on pilgrimage or in search of solitary retreat places in nature. During such wanderings, monks sleep wherever is available and eat only what is offered by laypeople along the way.